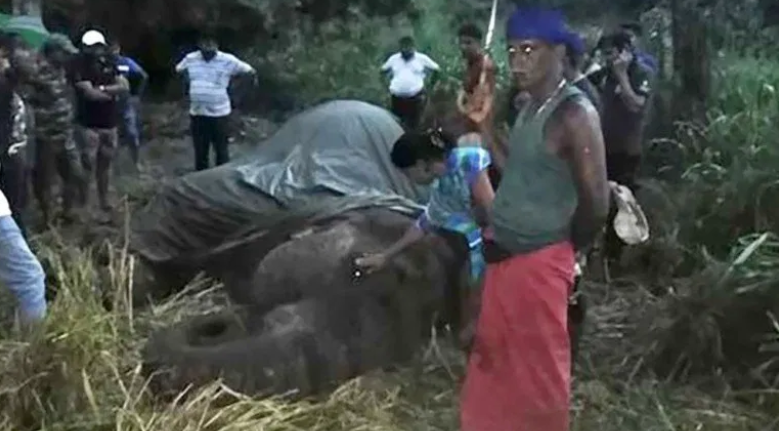 Recently, a young elephant, just 18 years of age, collapsed and died after being walked to the point of exhaustion at a tourist trap in Sri Lanka. According to the organization, Moving Animals, the juvenile elephant, who was forced to give rides to visitors on the Sigiriya tourist trail, collapsed and later died after giving back-to-back rides.

It is time for the exploitation of elephants to end. Please add your name to this petition! We will be presenting your signatures to E. Rodney M. Perera, Ambassador of Sri Lanka to the United States, asking for the government to intervene on behalf of exploited elephants in the country.

The elephant who died, decades before his natural life should have ended, was named Kanakota. The 18-year-old elephant should have been enjoying a life in the wild, with his family, but he was instead being forced to perform unnatural acts for tourists.

According to Moving Animals, Kanakota was one of two captive elephants who was being forced to haul tourists up and down the trail - the organization has stated that the enslaved elephants are bound with heavy chains, and threatened with sharp bullhooks.

Elephants are emotional and intelligent animals who undoubtedly suffer both mentally and physically when they are removed from their family members and are forced into submission for "tourist" duties. Kanakota was literally worked to death for the almighty dollar and this type of exploitation must be brought to an end.

We are weary of this suffering and we want to do what we can to bring it to an end. Please join us as we ask Sri Lanka to prohibit the use of elephants for tourism. These majestic animals belong in the wild, with their families, instead of being bound in heavy chains and forced to work.

Elizabeth Rachel signed Young Elephant Dead From Exhaustion: Stop Exploiting Elephants For Tourism! 2019-12-30 09:00:48 -0500
People who abuse, neglect, and otherwise torture animals without any regard to their wellbeing must be utilized as a “We will not tolerate this behavior” to animals! These people must be recognized and punished for their cruel and inhumane acts of violence, and disregard for life!

Hayley Brock signed Young Elephant Dead From Exhaustion: Stop Exploiting Elephants For Tourism! 2019-11-20 16:30:33 -0500
These elephants should not be exploited in this way. This practice needs to stop ASAP.

Helen Mckibbens signed Young Elephant Dead From Exhaustion: Stop Exploiting Elephants For Tourism! 2019-11-14 12:35:03 -0500
Sickening these brainless morons should be held accountable for the mutt & gef of this elephant.its sickening & it enrages me that morons stand by & let these horrible things happen.morons why don’t someone work them to mutt & gef as that’s the only way these idiots will no that animals aren’t robots.


Surely any of us experiencing disruption, pain, loneliness and isolation in our human lives will understand, then act rightly from this understanfing so that at-risk elephants are left in peace.

Linda Good signed Young Elephant Dead From Exhaustion: Stop Exploiting Elephants For Tourism! 2019-11-13 22:13:24 -0500
Anyone in any country who is still using elephants for tourist attractions needs to be in jail period!!! Any so called tourist who thinks it is okay to ride an elephant of any size after all the information on the mistreatment of the elephants also need to be jailed and fined for even an attempt to ride an elephant. These monsters need to be stopped now!

Annie Skarwecki signed Young Elephant Dead From Exhaustion: Stop Exploiting Elephants For Tourism! 2019-11-13 11:08:26 -0500
Annie Skarwecki There have to be better ways to entertain tourists than to give rides on elephants. This needs to stop or at the very least, make sure you care for the elephants so this never happens again. They don’t need bull hooks either. Elephants need to be wild, not chained up and tortured. Please stop this practice and find a better way.