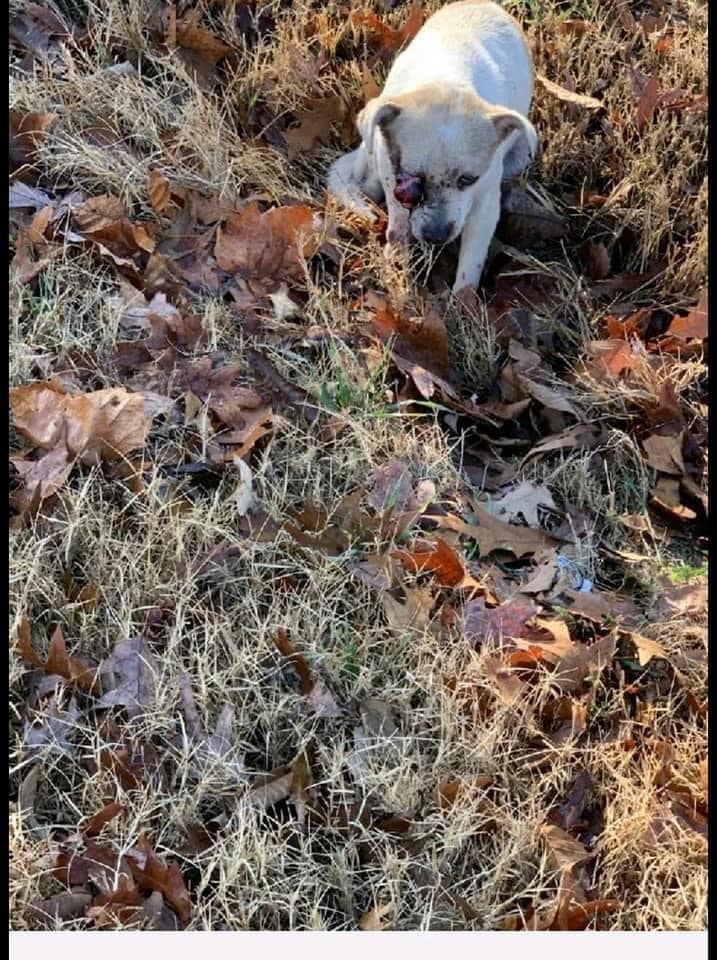 Witnesses in Humboldt, Tennessee, claim that animal control officers were seen beating a dog to death with a shovel outside of the animal control facility. A social media post about the disturbing situation reads, in part, "he just witnessed two guys from the dog pound in Humboldt beat this poor dog with a shovel til it was dead. One guy had the shovel as the other one held the dog down with the dog catcher pole. The poor dog was yelping til its last breath!! Kevin said the sound of that dog crying was horrifying."

The witness claims that the men threw the dog's body into a garbage pile, and then covered it with a bulldozer. Other witnesses (said to be five in total) claim that the men continued to harm other dogs until they realized that they were being recorded (screenshot of social media post below). 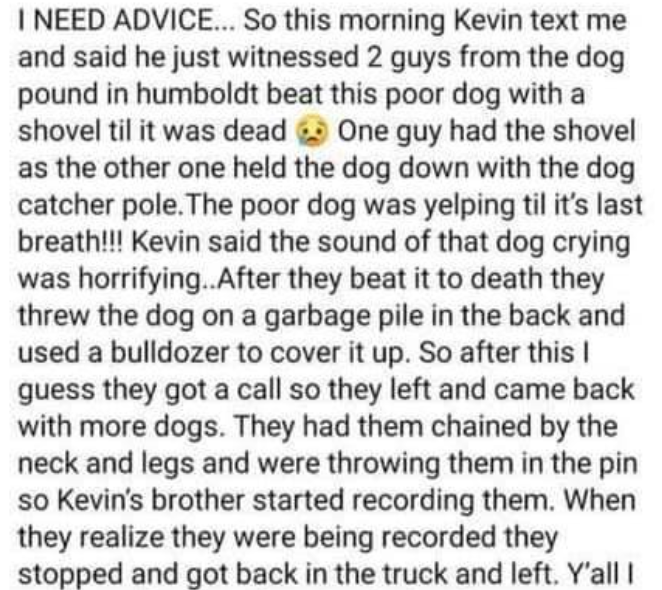 These are not just baseless social media claims. The local Humboldt Police Department has started an investigation and Mayor Marvin Sikes has released a statement:

"I promise this issue is being investigated by Humboldt PD and the DA’s office and I will do everything in my powers to see that these employees will be punished to the severity of there (sic) actions. I will not tolerate the actions being claimed. I promise I will not accept this kind of behavior from any city employee.”

Please sign the petition today - we will be presenting your signatures and comments to city officials along with a request for a full investigation. If the investigation confirms the damning eyewitness claims, we want these men to be fired and charged for their actions!

The allegations from these witnesses are abhorrent! There is no reason that ANY dog should be beaten with a shovel, much less by city employees. We do not want this situation to be swept under the rug. The local police department was inundated with calls from outraged people, and Humboldt Police Chief Reynard Buchanan has confirmed that an investigation is underway. 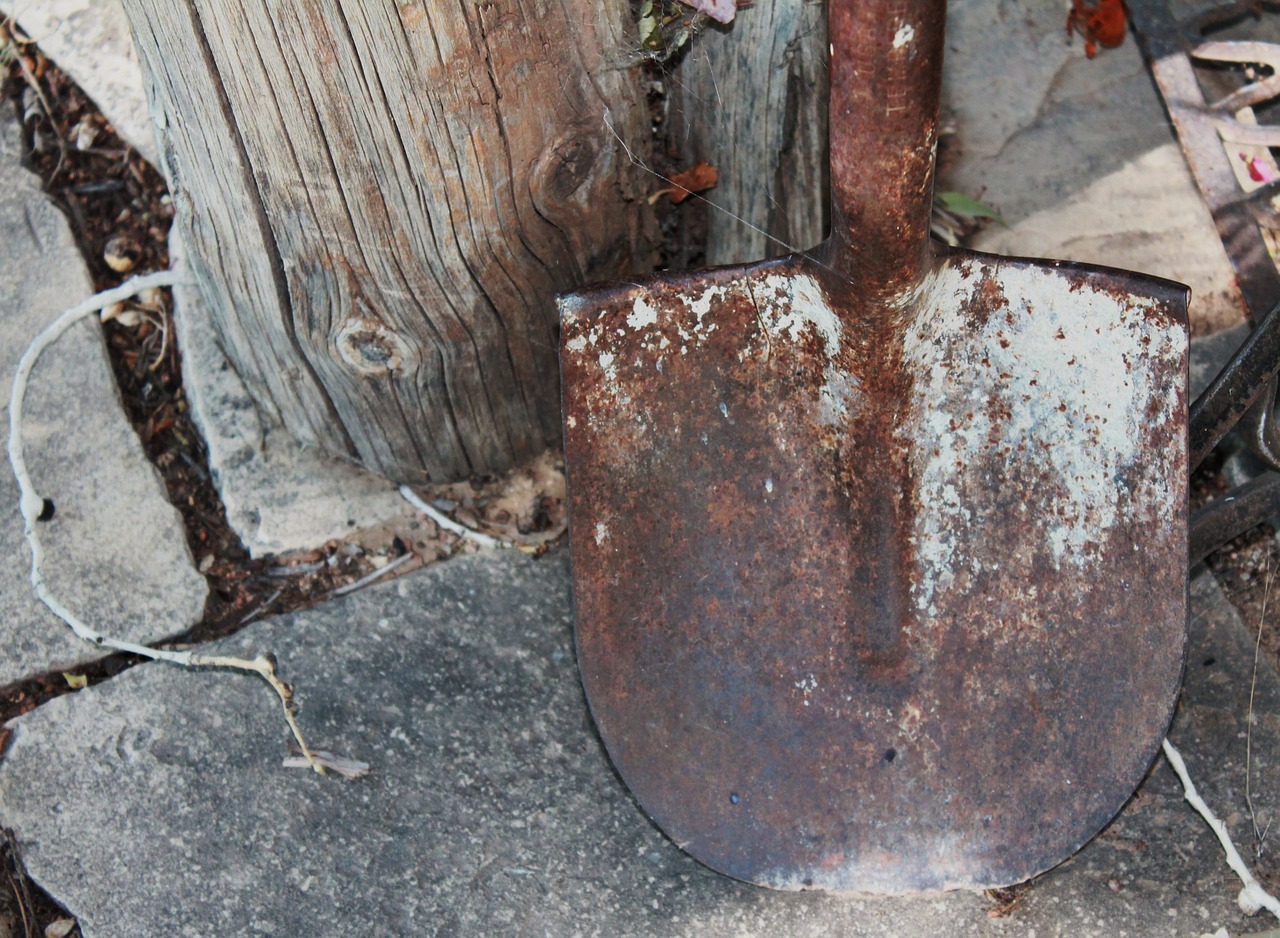 We want your signatures and comments to present to the district attorney when/if the investigation reveals that the eyewitness statements are true. If this is the case, these men must be fired and charged! Animal cruelty cannot be tolerated!

Animal Victory is committed to following this situation and we will keep petition supporters apprised of the investigation findings.

Update 6/21/2021: Animal Victory spoke with the Humboldt, Tennessee, clerk of courts and learned that the trial is ongoing, and no pleas have been entered. The next trial date is for June 25 at 1:00 p.m.

Update 1/12/2021: Animal Victory sent our letter of intent along with over 15,500 signatures to District Attorney Frederick Agee. Read our letter here.

Huge update 1/9/2021: On Thursday, police arrested James Johnson, 76, and Bruce Pafford, 56. The men are facing a Class E felony aggravated animal cruelty charge which could result in up to two years in jail. District Attorney Frederick Agee said, "If they're found guilty, the amount of time they'd be sentenced to would depend on what kind of past record they have." 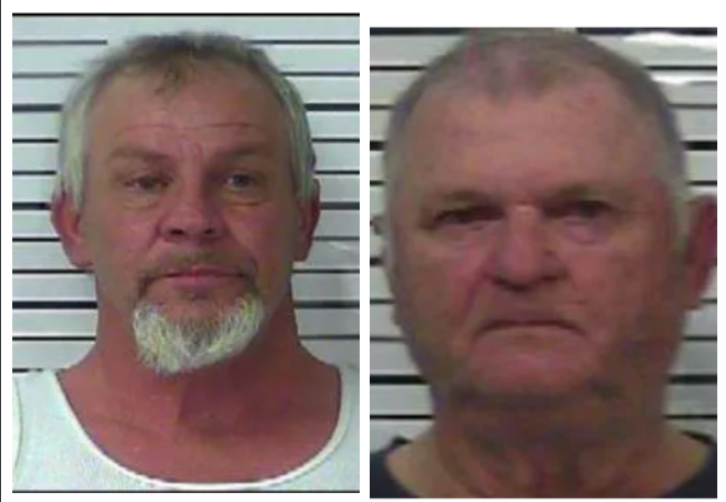 Dan Watson signed Witnesses Claim Animal Control Officers Beat Dog To Death With A Shovel 2021-08-04 12:01:59 -0400
Atrocious, they deserve to be beaten to death and bodies tossed on the burn pile!!!

Veronica Cortis signed Witnesses Claim Animal Control Officers Beat Dog To Death With A Shovel 2021-08-02 15:58:29 -0400
Please, ban them from ever owning a pet. Not sure they should continue to work as Animal Care Officers or any paid City Employee involving any animals.

linda Korpela signed Witnesses Claim Animal Control Officers Beat Dog To Death With A Shovel 2021-07-29 11:16:20 -0400
These two man are most likely also pedos. Its well know truth that animal and child molesters like to hurt anything that are innocent and vulnerable like as child and animals(also psychopaths).So these mans act is big red allert.They computer,phones etc should be check up cause there is 99% reason that there is found childporn and animal cruelty evidens also. These mans hould put in jail for good. They are Psyko!

Valerie Hitchens signed Witnesses Claim Animal Control Officers Beat Dog To Death With A Shovel 2021-07-28 12:13:38 -0400
The same should happen to the perpetrators

Cass Schmidt signed Witnesses Claim Animal Control Officers Beat Dog To Death With A Shovel 2021-07-26 23:46:08 -0400
This is disgusting. These men need to be prosecuted to the highest extent of the law for animals cruelty. My heart aches for these poor dogs, and any other animals that have lost their lives at the hands of these disgusting human beings.


Charge them with animal cruelty, and see to it that they not only lose their jobs, but are seen by the public eye as they are – animal abusers. Take away any right they may have to own an animal, ever.

Throw them in jail and let them rot. I am so incredibly infuriated. Please, do NOT let them get away with this.

Thomas Bunting signed Witnesses Claim Animal Control Officers Beat Dog To Death With A Shovel 2021-07-26 16:53:23 -0400
Make those who murdered defenseless animals to the fullest extent of the law!