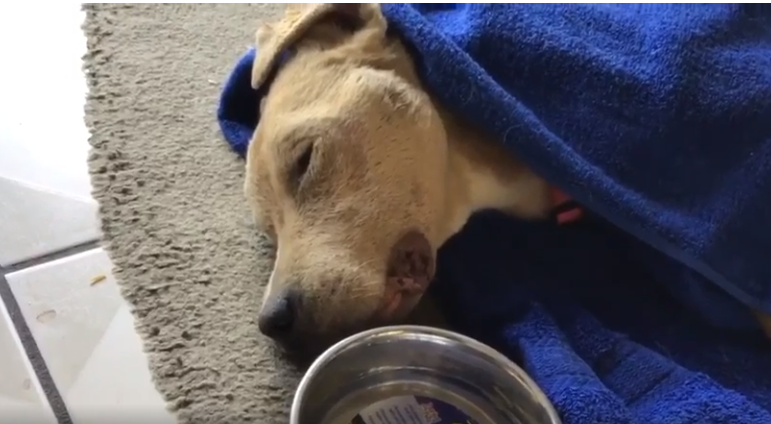 In four short months, a dog named Tori went from healthy to dead - at the time of her death, she weighed just 18 pounds. The man allegedly responsible for her death is identified Matthew Wydrinski of Mercer County, New Jersey.

Tori's dying moments were recorded on video. The malnourished dog, too weak to raise her head, can be seen on the floor, next to a brand new food bowl which is empty. The video is too disturbing to post.

We want justice for Tori. Your signatures will be sent to the Mercer County Prosecutor's Office - this monster must be punished! 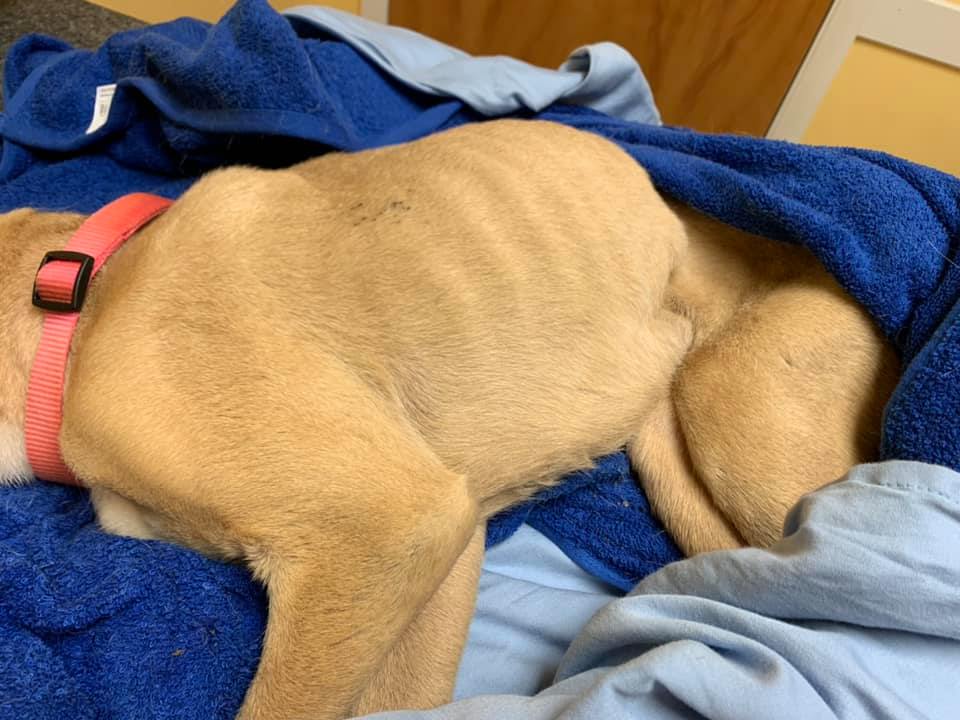 A woman who was contacted to help Tori, after a friend of the dog's owners reached out for help, is hoping that Wydrinski will have to pay for what he did. In a public Facebook post, Jennifer Wilhelm-Kees stated, "He only had her for 4 months. She was given away on the internet. She died at the hands of a monster. A sick, twisted control freak."

According to Wilhelm-Kees, before Wydrinski got a hold of her, Tori had lived with a family for her entire life. She was given to Wydrinski after her owners divorced. In the Facebook post, Jennifer explains how the family dog lost her home when the husband decided to give her away, "He made the decision to give her up, posted her online, met this family, kids played in the grass with her, promised the best home ever and the owner felt comfortable with them and then the sick bastard adopter that he is starved her to death. There were no intentions on adding her to the family, he’s just a sick bastard. It’s the 3rd dog that this happened to under his “care."

We want this person behind bars, forbidden from ever owning another animal, and we want him to be denied pre-trial intervention (PTI). PTI is a diversionary program that is generally offered to first-time offenders as an alternative to other prescribed penalties (including but not limited to jail time). We will be presenting your signatures (and comments!) to the prosecutor. Please join us in letting the prosecutor know that we ALL care about animal cruelty cases and we want justice for Tori. 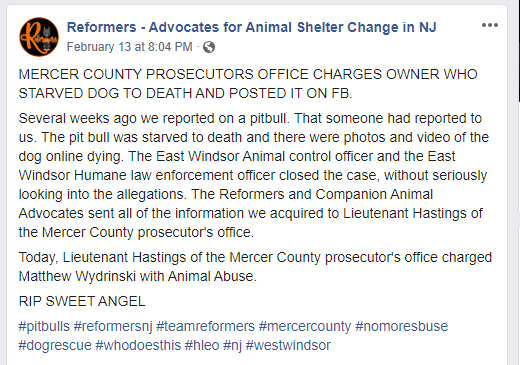 Update 4/5/2021: Dexter S. Wright Sr., MBA, Judiciary Clerk 2, has informed Animal Victory that this is currently an open complaint and there are no scheduled events. Prosecutor’s file no: 20-0678.

Update 1/14/2021: Animal Victory has been informed that the court was transferred to Trenton Superior Court due to the charge being higher than what the municipal court hears. The court is scheduled for Feb 2021.

Update 10/28/2020: It is possible the court was held today. We have sent 28,042 signatures to Read our letter to Public Information Officer Casey DeBalsio here

Update 10/14/20: The following was the response that we received from our letter: "Good morning. I am familiar with the case. I just verified that the prosecution is still pending- meaning it has not yet reached any resolution such as a plea, trial, etc. It has an upcoming court date at the end of the month. I'm sorry I don't have more information for you."

UPDATE: 02/26/2020: We have a court date. The complaint lists his first appearance in Mercer County Superior Court as March 19 at 11 a.m. There is a possibility that the date could change.

On February 13, 2020, Matthew C. Wydrinksi was charged with one count of Animal Cruelty, 4:22-17c(2) a crime of the third degree. This investigation originated out of East Windsor Township, Mercer County, New Jersey. A crime of the third degree is the highest criminal charge in New Jersey for animal cruelty. The only exception is 2C:33-31 and 32 which are crimes related to dogfighting.

As this is an active investigation, no further information will or can be released at this time. As in every investigation, the suspect is innocent until proven guilty.

Melina Aloian signed Punish Man Who Starved Newly Adopted Dog To Death 2021-04-18 19:15:26 -0400
I hope this man starves to death, to the point that he is so hungry but he can’t swallow anything, will pray for that

Randall Groetken signed Punish Man Who Starved Newly Adopted Dog To Death 2021-04-18 16:10:26 -0400
Punish this worthless fuck for all he has left!!! Prison is the only option for starving an innocent animal to death on video!!!!

Maxine Moore signed Punish Man Who Starved Newly Adopted Dog To Death 2021-04-18 16:04:52 -0400
This is ABSOLUTELY heartbreaking, the person that did this SHOULD BE JAILED, I’m so sick and tired of seeing abuse and torture of animals and people getting off with a slap on the wrist, ITS GOT TO CHANGE, WE NEED TO TREAT ANIMAL ABUSE THE SAME AS ABUSE OF HUMANS, THEY ARE NO LESS IMPORTANT THAN PEOPLE, THEY FEEL FEAR AND PAIN JUST THE SAME AS US !!!!!!!!!!

Please give this individual the harshest punishment possible.

Victoria Miller signed Punish Man Who Starved Newly Adopted Dog To Death 2021-04-18 10:13:03 -0400
I cannot accept anyone getting by with treating any animal with cruelty and death. These people who think they can get by with doing this needs to be punished the same way they hurt the animal.