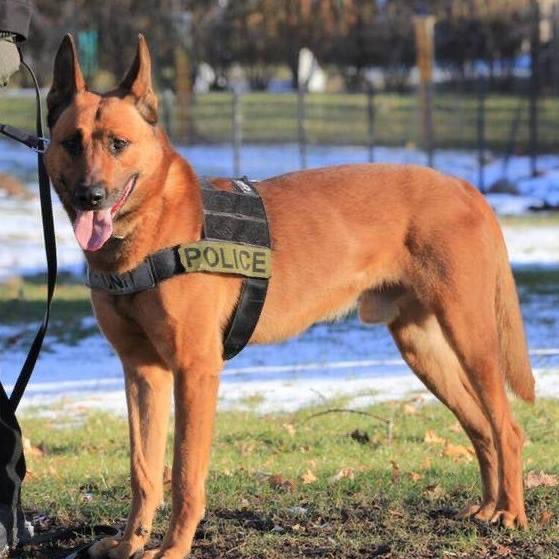 A veteran police K9 with the Braintree, Massachusetts, police department was killed, and two officers were injured, in a violent shootout with a domestic violence suspect on June 4. The K9, named Kitt, accompanied officers who were searching a heavily wooded area adjacent to McCusker Drive. The team was searching for a suspect who was believed to be armed with multiple handguns.

According to a press release from District Attorney Michael Morrissey, Kitt was killed, and two officers injured, when the suspect, later identified as Andrew Homen, opened fire. Homen was killed in the exchange.

After Kitt's death, the department issued a statement about the K9:

K9 Kitt started with us 12 years ago. Going through K9 patrol school, you came out…guns blazing…during your service you apprehended countless criminals, often in the dead of night…through thick brush, and insane weather. You found bad guys, wandered elderly, firearms and other ballistic evidence.
You were never shy to help out at K9 Demo’s or our Citizen Police / Junior Police Academies.
You also never declined a moment to be showcased on our social media
We will forever miss and remember you buddy. Free Time….
K9 Kitt
EOW 6/4/21

The department also recognized the loss of Kitt in a Tweet:

Free Time Kitt. We will forever miss you and always remember the good times we shared with you buddy. You went out a lion, protecting your dad and his partners. K9 Kitt EOW: 6/4/21 #braintree #workingdog

Police Officer Matt Donohue, one of the injured officers, was released from the hospital a day after the shooting. Officer Bill Cushing, Kitt's handler, remains hospitalized with serious injuries.

Gail Greenlee commented on Police K9 Killed, Officers Injured, In Violent Shootout With Suspect 2021-06-18 17:49:23 -0400
@Sue Marston I hope you get that info out there!!! Thank you for caring and standing up for our voiceless loving animals.

Sue Marston commented on Police K9 Killed, Officers Injured, In Violent Shootout With Suspect 2021-06-12 22:04:42 -0400
I would like to see groups, which allege to care about these dogs, break away from mainstream media-style reporting and learn who is REALLY harming K9’s the most.
K9 handlers kill and maim far more of these dogs than any suspects on the street.
It is standard procedure to routinely kick, punch, "helicopter, " slam to the ground, hang the dogs to unconsciousness, and more. Where is the reporting on THIS?

I worked in a department, did the research, and have the information for any reporting platform that wants to share the truth.

S S commented on Police K9 Killed, Officers Injured, In Violent Shootout With Suspect 2021-06-12 15:06:27 -0400
RIP sweet Kitt, thank you for your service. I am so sorry that this had to happen to you. Please put away those responsible for his death.

Roving Rovers commented on Police K9 Killed, Officers Injured, In Violent Shootout With Suspect 2021-06-10 15:51:59 -0400
RIP Kitt. Condolences to all the officers who worked with this wonderful hardworking dog! 💙😔🙏🇺🇸

Sue Marston commented on Police K9 Killed, Officers Injured, In Violent Shootout With Suspect 2021-06-10 15:24:12 -0400
Here is what all animal protection advocates (if they really are that) SHOULD KNOW:
I worked in law enforcement and the dogs who are killed by a bullet are lucky, because their lives are ongoing torture and not what is portrayed to the public. I researched this and found it is not just my department. The torture of K9’s (including slow hanging to unconsciousness) is STANDARD, it is TAUGHT, and they LIE about it to the public. I have saved a great deal of documentation, but to anyone who wants to start the search, go to Stop K9 Torture. There is a contact link there for anyone who wants to know more. All those professing to love animals should not promote K9 units.