Family's Dog Brutally Beaten With Broomstick - Abuser Must Be Punished! 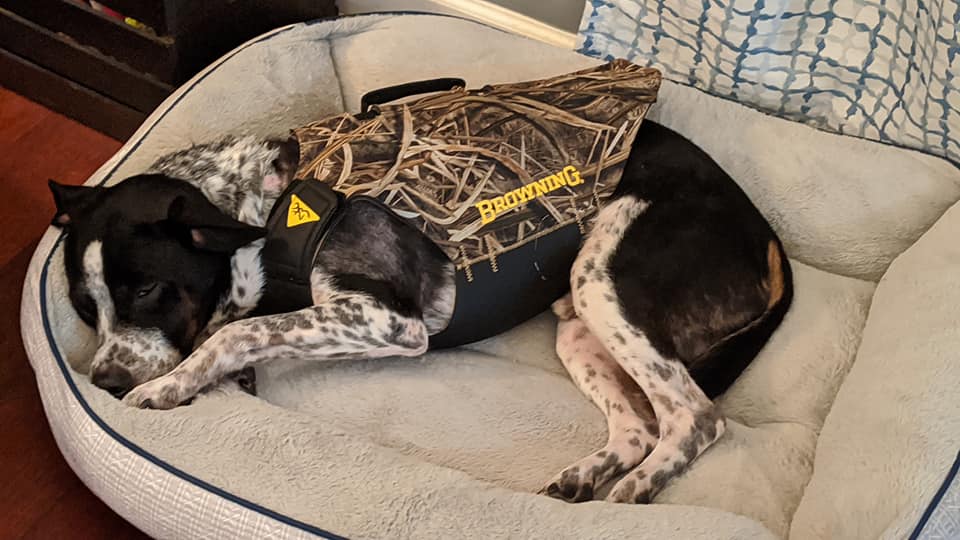 An Alabama dog suffered horribly when a family member's boyfriend ruthlessly beat him with a broomstick. The horrific abuse was captured on surveillance video and it is painful to watch (click here for link to video).

20-year-old Adam Callaghan is the man identified as the person who viciously attacked the Raymer family's dog, Echo. A veterinarian confirmed that Echo suffered from blunt force trauma - exams revealed that the dog had been subjected to long-term abuse that his family was unaware of until finding the evidence on surveillance footage.

Despite Echo's injuries AND the surveillance video, Callaghan is only facing a misdemeanor charge. This is NOT sufficient. Please sign the petition as we fight for justice. Callaghan should be facing a felony charge of animal torture and at sentencing, he should be sent to prison AND prohibited from ever owning an animal in the future. 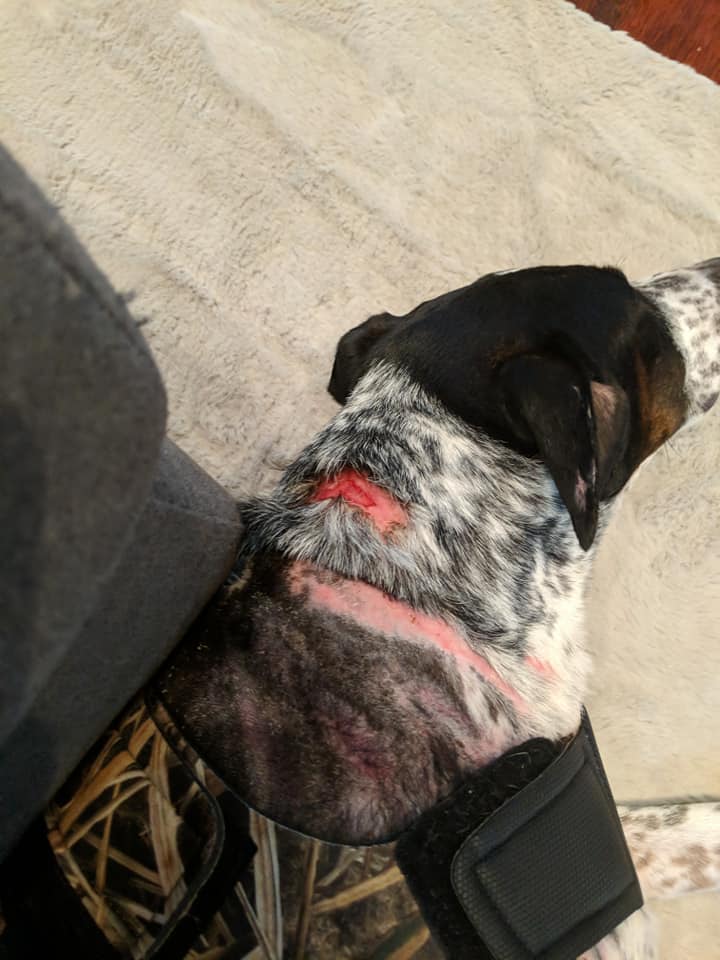 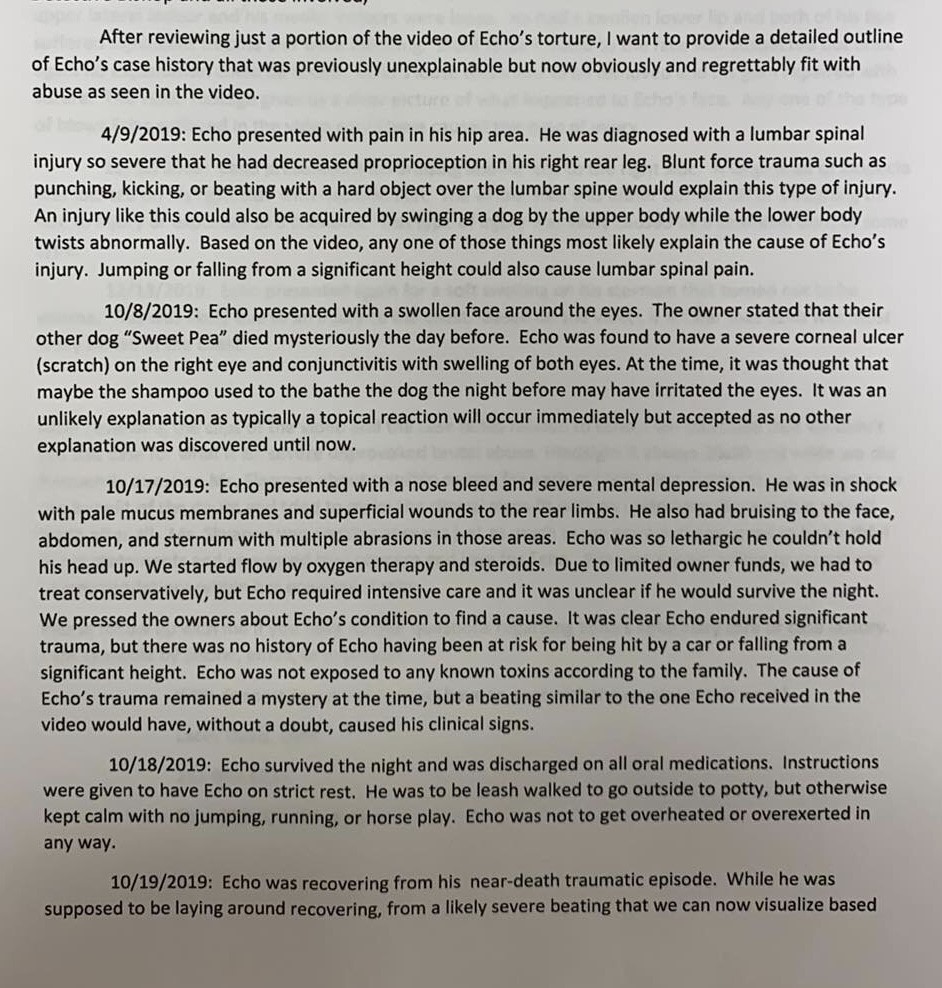 Echo suffered horribly and now it is time for his abuser to pay for that abuse. Please sign the petition, which will be presented to the Robertsdale Police Department, and the Robertsdale City Prosecutor, and the Baldwin County District Attorney’s Office. Enough is enough - animal cruelty cannot and should not be tolerated! 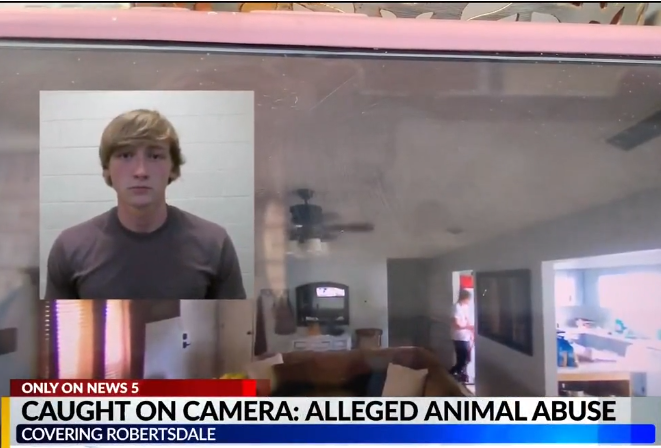 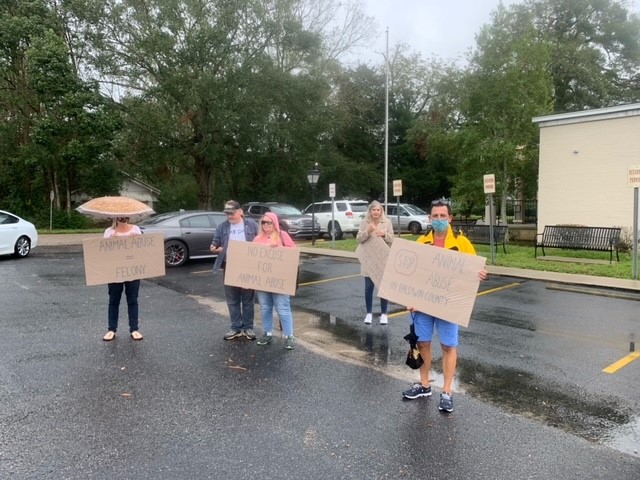 Supporters turned up for Adam's first court date on October 28th. Hurricane Zeta's arrival put a damper on the turnout.

Update 4/21/2021:  Animal Victory has learned the court in Bay Minette overturned the judgment and charged Adam Callaghan as a youthful offender. AV spoke with Tiffany with the Baldwin county clerk's office, and she informed us that the case was protected under "youthful offender" so details are no longer public. Animal Victory is dissatisfied with the outcome. Adam deserves a punishment to fit the crime. We can only hope he is getting help for his emotional troubles. Thank you to everyone who signed the petition and helped us fight.

Update 12/16/2020: Adam Callaghan pled not guilty to the charges, but he was sentenced to six months in jail and a $500 fine (which is the highest penalty for this misdemeanor charge). His attorney has appealed the sentence and Callaghan is due back in court in January. Animal Victory has been informed by someone close to this case that the petition (and the attention it helped bring to the case) helped bring about the maximum sentence in court.

Update 12/4/2020: The prosecutor's office has informed AnimalVictory.org that they have been flooded with emails and calls about this case. We are waiting for a call back with more information about what is happening.

Update 11/03/2020: Adam Callaghan was charged with animal cruelty and went to court on October 28th. However, there is no verdict yet. Adam's next court date is November 18th and we need your signature to help convict Adam with the maximum punishment!

Update 10/27/2020: As of October 14th we learned there was not enough evidence to convict Adam with a felony. The case has currently been kicked back to Robertsdale, Prosecutor Ken Raines, and they do not have the details yet from it being kicked back from Baldwin county.  We will update all as we get information. Animal Victory knows there was enough evidence to charge a felony as is indicated in the video. We are very sad to learn Adam is being charged with a misdemeanor and not a felony.  The court date is expected to be October 28th. There is a Facebook group planning to protest at the court. Please follow details here for the protest if you would like to join.  https://www.facebook.com/Justice-for-Echo-114717296925881/

Update 07/02/2020:  We recently made contact with the Robertsdale PD: We were told there is new evidence, it is an active investigation, and they want nothing short of the maximum charges for this case.

Today we sent your 9413 signatures and comments to the City Prosecutor Ken Raines and The Baldwin County District Attorney.

Read our letter to the District Attorney Baldwin County here

Read our letter to the City Prosecutor here

Ruth Jones signed Family's Dog Brutally Beaten With Broomstick - Abuser Must Be Punished! 2021-04-21 19:17:14 -0400
this brutal person is a high risk offender, first he is abusing a family’s dog – in supposed secret! he will move on to abusing vulnerable adults and children if he is not stopped now. Charge him at the highest level you can given the evidence available and punish him to the highest level you can please.

Suzanne Peters signed Family's Dog Brutally Beaten With Broomstick - Abuser Must Be Punished! 2021-04-03 16:44:22 -0400
Lock this disgusting individual up and lose the keys!!! He should NEVER be allowed near any animals ever again…….

Kyle Dawn Armstrong signed Family's Dog Brutally Beaten With Broomstick - Abuser Must Be Punished! 2021-03-04 17:37:14 -0500
This young man, if you can even call him that is despicable. He is a a very sick and deranged individual. If the courts do not charge him with a felony charge then I have truly lost all faith in our “Justice System”. If he gets off free to do this to other living creatures, then we have failed. Bwe have failed as a system, a people, we have just failed……I mean it is as clear as day that he literally asked the dog in a sweet voice “do you want the broom stick today? Do ya?”. Come on already. I mean what more do you all need to see that this young man is a danger to society and all living creatures. Come on already!!!!!!


I could care less about you and you need beaten