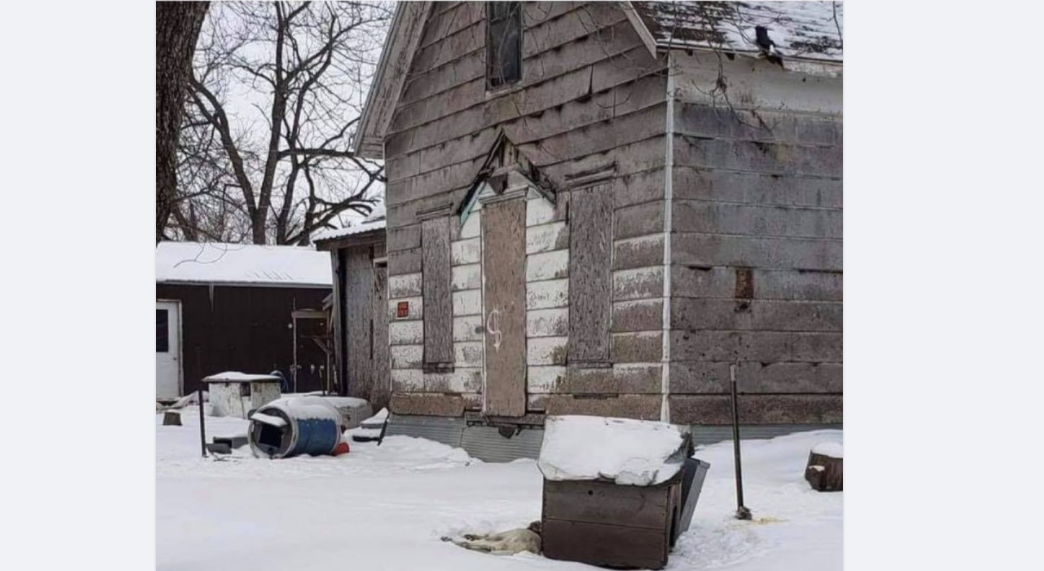 In the midst of frigid conditions in Iowa, a dog slowly froze to death while chained to an outdoor dog house. As appalling as this is, the dog's owner is not facing charges and he is being allowed to keep his other dog.

This is unacceptable! Dog owners are required to provide adequate shelter from the elements and this man did NOT provide enough for his dog to survive. Please sign today as we push for charges AND to have the other dog removed from this person's care.

The dog died at the end of a short leash, tethered to a wooden dog house outside of a home in Davis City. Though the police were alerted to the situation, they failed to arrest the dog's owner. As reported by KCCI News, the owner stated the deputies told him he would not be arrested because he "showed remorse."

Remorse or not, the law was broken. Iowa Code 717B states:
The owners are required to provide shelter that protects the animals from the elements:
Ventilated shelter reasonably sufficient to provide adequate protection from the
elements and weather conditions suitable for the age, species, and physical condition of the animal so as to maintain the animal in a state of good health to the extent that the animal’s health or life is endangered. The shelter must protect the animal from wind, rain, snow, or sun and have adequate bedding to provide reasonable protection against cold and dampness. A shelter may include a residence, garage, barn, shed, or doghouse. 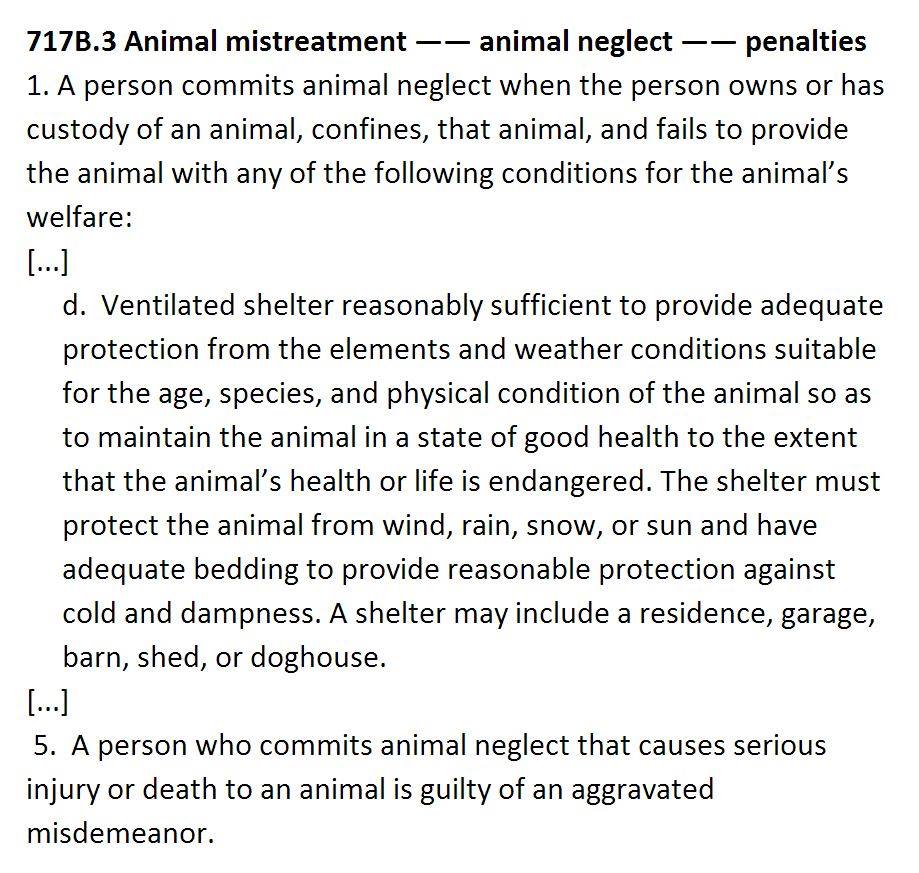 It is painfully apparent that this dog DID NOT have adequate protection from the elements - if he did, he would not have frozen to death. With your support, we will demand that the Decatur County Sheriff arrest this man and remove the surviving dog from his custody. We will also petition the Decatur County Attorney to uphold charges against this man.

Please add your name to the petition today. This situation cannot be swept under the rug. Imagine this dog's suffering before succumbing to the bitter cold.

Imagine the pain and despair this dog felt as the frigid conditions slowly drained the life from his body. This cannot, and should not, be ignored!

Update 2/22/2021: DA Jeanes has responded to our letter. She has informed us that the dog's body has undergone a necropsy, but the results are not back yet. According to Jeanes, the sheriff's office IS investigating the matter. Contrary to the KCCI report, DA Jeanes said, "The owner was not told that he would not be prosecuted because he was remorseful. He was told that a criminal investigation would be conducted, and it began immediately." Animal Victory will continue to follow this case closely. We have sent a list of questions to the district attorney about the findings of the investigation and will update the petition when/if we get a response.

Our 3rd letter to Sheriff Ben Boswell and 24,351 signatures have been sent today asking for an update. Read our letter here.

Update 2/18/2021:Our 2nd letter to Sheriff Ben Boswell and 16,856 signatures have been sent today asking for a full investigation and charges against the owner. Read our letter here.

Update 2/17/2021: Our letter to Sheriff Ben Boswell and over 10,700 signatures have been sent today asking for a full investigation and charges against the owner. Read our letter here.

Dexter Watson signed Dog Froze To Death But Owner Hasn't Been Charged And Is Allowed To Keep Other Dog 2021-03-02 11:09:54 -0500
Put him in prison, or better yet, tie him to his outdoor dog house in the same temperatures as he left this poor dog!!!

Evgenia Bludenova signed Dog Froze To Death But Owner Hasn't Been Charged And Is Allowed To Keep Other Dog via Janelle Babington 2021-03-02 02:15:03 -0500
Evgenia Bludenova

Charlene Burmeister signed Dog Froze To Death But Owner Hasn't Been Charged And Is Allowed To Keep Other Dog via Janelle Babington 2021-03-02 02:00:02 -0500
He should be charged

Neglect should not be excused

Deborah French signed Dog Froze To Death But Owner Hasn't Been Charged And Is Allowed To Keep Other Dog 2021-03-02 00:29:30 -0500
How disgusting. Don’t you have animal cruelty laws in Iowa? Prosecute and take and take away all other animals!

Kim Wright signed Dog Froze To Death But Owner Hasn't Been Charged And Is Allowed To Keep Other Dog 2021-03-01 22:01:58 -0500
Justice for that tortured pup out on short leash frozen to death it shows how disturbing pathetic filth from so called people in authority are and how they refuse and don’t care about the animals ever to allow these despicable atrocities towards dogs why the hell do we pay u torturing killers for if that’s all u think about animals why ?? RIP PRECIOUS PUP 🙏😭💔🌈